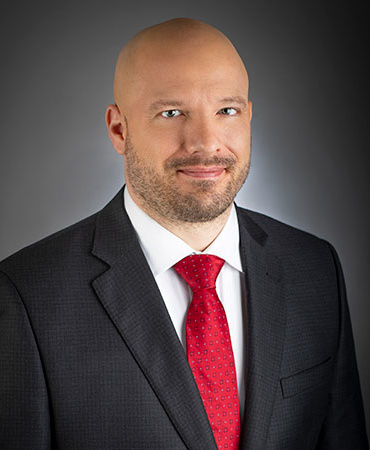 Ryan’s work begins with a conversation. He’s found that each of his clients are looking for an attorney who will approach them seriously and listen to their concerns to find a legal solution they feel good about. Ryan appreciates that desire, especially where it concerns matters of family law.

While Ryan is honest and upfront with each of those he represents, he understands that family law issues are some of the most stressful experiences and believes an important part of his job is toning down the negativity and animosity that sometimes surrounds family law cases. He’s seen that an ability to communicate and remain amicable with one another can often lead to a more favorable resolution to all those involved.

As a 10-year veteran of the United States Air Force, Ryan strived to achieve integrity and excellence in all he did. Embedded in those core values is a strong attention to detail which he also implements in his work as an attorney. In addition to having the moral and intellectual courage to do the right thing, he always goes the extra mile to ensure his work is accurate.

Ryan received his undergraduate degree in Real Estate Finance from the University of Texas at San Antonio. He’s found this experience invaluable in his legal career as he’s helped clients value their assets and divide their property. He studied law at the University of Houston.

At home, Ryan enjoys spending time with his wife and young daughter, cooking, taking on new DIY projects, and tending to his cactus garden.